A Dog’s Guide To Humans: Sleep 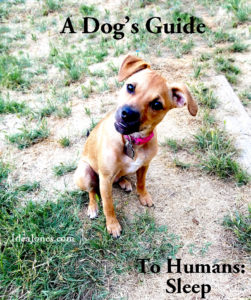 As with so many things, humans have a strange relationship with their own bodies (just wait until I get to humans and elimination. Oh my dog, that’s a whole subject in itself).  They are so uncomfortable in their own skins that they do things to themselves that can only be described as straight-up freaky. One of the things they really can’t figure out is sleeping.

How, when, where or with whom, humans can screw all of that up beyond any dog’s ability to understand, but I’ll do my best to explain it.

I mean, quite literally, they don’t grasp the concept. Not really. They seem to do all right as puppies, but once they can walk unassisted, they start experimenting with it.  Their puppies, called “babies,” are the most sensible stage of their development. They eat when they’re hungry (well, they demand food), poop when they need to, and sleep when they’re tired, unless someone or something prevents them. Yes, you read that right — adults try to manipulate their puppies so they sleep not when they’re tired, but when it is most convenient for other adults. This isn’t surprising when you realize that this is what the adults do to themselves and to each other.

They have a schedule that is baffling. They wake up, usually after not getting enough sleep, so they’re cranky and clumsy. By ingesting the runoff of water in which various plants have been dredged, they open their eyes, at least somewhat, and begin to communicate. Prior to drinking the runoff, they communicate mostly in grunts and gestures. After, they communicate in sharp, harried barks and run around grabbing things and  putting them into other things, usually some sort of bag or box, and complaining that they are now late.

Laugh if you will — this is how they start most of their days.

They spend their days in a variety of behaviors, most of which seem to have little practical value, but do keep them occupied and, for the most part, out of trouble. During the afternoon, when their energy dips, they do not rest. Instead, they ingest more runoff so they can keep doing whatever it is they’re doing.

Then they come home and do more things, not very effectively, because they’re tired. When they get tired enough, they slump on the supplementary dog bed (aka “sofa”) and stare at boxes with emit light and sound, which helps keep them awake. Sometimes these are thin, small boxes they can hold in their hands. Other times they are very large boxes.

Eventually, long after they should be asleep, they will topple over and sleep in front of the glowing boxes, still resisting the urge to go to their comfortable beds to sleep. Eventually, many of them do rouse somewhat and stagger to their beds, but some stay in front of the glowing boxes so they can wake in the morning and complain about the parts of their bodies that hurt.

Humans dislike sleep. They brag about how little they get. They pretend they don’t need it. They talk about “snatching” or “grabbing” it. Where any sensible dog will tell you that if you’re tired it’s time to sleep, humans avoid it as long as they can.

Instead of viewing sleep as a necessary part of the healing process, humans treat it like an enemy who must be conquered. Even as they are staggering, bleary-eyed and foggy-brained, they tell anyone who will listen that they “don’t need that much sleep.” It causes them untold health risks from accidents to heart attacks, but they take pride in their unwillingness to lie down and close their eyes as if simply being able to keep their eyes open long after their brains have stopped working were some sort of accomplishment.

It is worth considering what marvels they could accomplish if only they weren’t so tired all of the time. And cranky. I’ve heard the phrase so often that the one word doesn’t sound right without the others. Tired and cranky.

I doubt we’ll ever know what humanity could be if it only it got the occasional nap.

I will write my next dispatch as soon as I can. Meanwhile, it’s time to go to bed. ~ Gingeroo