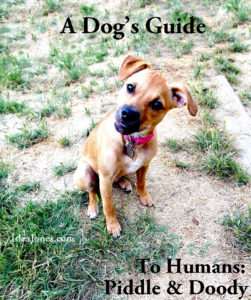 A word about wiz.

You might want to go relieve yourself before you start reading this dispatch.

Of all the things I’ve observed about humans, the most perplexing is their attitude toward their own bodies and natural processes. Honest to Dog, it’s confounding. I’ll see if I can make even minimal sense of it, but some of this you will just have to accept on faith. I swear on my favorite squeaky toy, what I’m about to tell you is true.

I’m not talking about someone seeing them poop. When someone watches you go, it’s awkward and weird, no doubt about it. I’m talking about simply acknowledging that you do poop, or pee, at some point in your day.

I think it’s some sort of sacred ritual for them. They even have special rooms in which to relieve themselves. They also wash themselves in that same room, which is odd unless you consider it as part of a ritual. You have the shameful elimination, then the ritual cleansing. This might explain why it’s considered such a private event.

Outside of the Altar of Elimination, though, they try hard to pretend they don’t have to go. Some humans use special code words for elimination. Piddle, which sounds like an endearment for a puppy, is actually a code word for peeing. There are many others. One is “tinkle.” I met a dog named Tinkerbelle and she said her name was very confusing as nobody ever rang a bell when she tinkled. I theorized that maybe they were saying it sounded like a bell when she tinkled. Human hearing is quite limited, after all. This seemed to satisfy her and make her far more happy with the situation.

There are also many words for defecation, including “doody.” My humans like to watch historic recordings of the stories that appear on the glowing boxes. One featured a man in a cowboy suit who talked to a wooden toy he called “Howdy Doody.” I do not believe he would have greeted even a toy by saying, “Hello, Turd,” but “Howdy, Doody” seemed to be not only acceptable but much admired, to judge by the humans slapping their front paws together (known as “applause,” the equivalent of a happy tail wag).

They have a great many words for peeing and for pooping, from those supposed to be rebellious (“shit”) to those meant to be euphemisms (“do your business,” for example. This one confused me quite a bit at first as it seems an odd business to be in).  A species only exhibits this behavior in regards to things seen as taboo.

Not their own, I hasten to add. They might be uncomfortable with their own elimination, but they are downright neurotic about ours. My own humans will not let me eliminate in their Altar of Elimination, although they do allow human visitors to do so, so I must go in the back yard. Strange as this is, it is nothing to the behavior of some humans.

I have been told of dogs who are swatted with objects when they eliminate inside the dwelling. It has even entered their language. To be “hit with a rolled-up newspaper” is a general term for being corrected. It is uncertain what the thinking is, but I’m inclined to accept the explanation given to me by Runs With Nose Lifted (aka “Wowzer”), a Great Dane I met. He theorizes that as uncomfortable as humans are with elimination in general, some are driven mad in the presence of it. Wowzer said he solved the problem by going behind the sofa to eliminate.

Another dog, Steps High And Walks Fast (aka “Charlie”), said she tried designating her own altar — the tiny room in which the humans store their clothing — but this proved displeasing to her human companions, so as of that morning, she had started going under their bed, which seems reasonable.

There is more to write on this subject, but I am still compiling my notes, and will send another dispatch as soon as I can.