A Dog’s Guide To Working With Humans 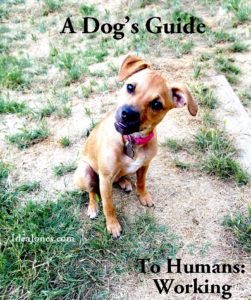 Humans are both fascinating and confusing.

If you want to work with humans, there are a few important things you need to know.  I’ve been working with these humans for a couple of months now, and I can already tell that working with humans isn’t as easy as working with dogs:

As you know, among dogs, we all sort out who does what and do what we do best.  I have the best sense of smell in our pack, but Reo is better at spotting squirrels in trees. I’m little and fast, but Moby is big and strong. Humans can use can openers. We all have our role to play.

Humans have an “all or nothing” approach to control. They don’t want to give up any, or they pretend they gave up all of it.  And nobody listens to anybody just because she’s good at that particular thing. They think listening to someone who knows what she’s talking about means giving her some sort of power over them… How do humans get anything done? They overcomplicate things so much.

This lack of awareness of who or what is around them causes them endless problems. When a pack works together, we pay attention to where the other members of the pack are and what they’re doing. If Moby flushes a rat, Reo and I need to be able to help him catch it. If we don’t pay attention to each other, the rat gets away. Which means we’ll probably have to chase that same rat another day — plus a bunch of baby rats.  If I flush a rat, I need Reo and Moby to help me, because I’m a baby and the rat is probably almost as big as I am. If they aren’t aware of me, the rat gets away, or I’m rat chow.

Humans engage in things far more complicated than chasing rats, but usually they don’t seem to be aware of the other people involved. If Reo chases a rat and it runs my way, I have to chase it toward Moby so he can take care of it. Moby needs me to do my part, so he can do his. But humans take on projects where each person  has to chase his rat, so to speak, on time, so the next person can chase her rat.  But they ignore all of the other people waiting for them and do whatever they feel like, whenever they feel like it, so the next person waiting for the rat to come his way misses it, or gives up and goes home.

No wonder there are so many rats in the world.

The humans are interesting animals with many bizarre habits, and the ones I have adopted are very nice, even if they are, as all humans seem to be, somewhat limited.  My studies continue, and I will send more dispatches as I can.