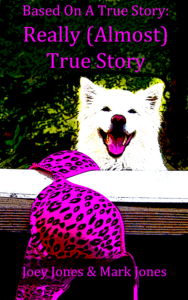 I entered R(A)Ts in the ScreenCraft Cinematic Books competition. When we got the alert that we’d made the quarterfinals, I was surprised — because we’d been getting ready to go out of town for a friend’s memorial, and I’d forgotten we entered. Mark was surprised because I’d forgotten to tell him we’d entered.

In the midst of what was a rather down time otherwise, a pleasant surprise, thanks to ScreenCraft (a screenwriting organization).  Being as how ScreenCraft is for screenwriting, they have only one book contest (and one for short stories). The focus is, of course, on books that would make good movies. So we were very excited that our book advanced to the semifinals. Multiple rounds of readers thought R(A)Ts would make a good movie!

But first, we need to find an agent who thinks it’d make a good book. Lots of other people do — beta readers, Amazon Kindle voters, the PNWA reviewer, people who lingered to hear a reading at Barnes & Noble, readers from ScreenCraft — but so far, we haven’t found that agent who gets it. The hunt continues. Somewhere there’s an agent who will see what all of those other people see.

And we really did go out for a chicken dinner. We have a tradition of celebrating good news at Sizzler (long story).  So winner, winner, Malibu Chicken dinner. Not sure what makes it “Malibu” chicken, come to think of it. But you don’t go to Sizzler for the chicken. You go for the cheese toast.

We entered R(A)Ts in a writing contest, going up against both established novelists and first-timers (like us). It was anonymous on both sides — the reviewer didn’t know who we were, and we didn’t know who s/he was. Which prevents us from thanking him/her in person, but we want to put it out there… thank you!

Whoever you are, your review arrived in the mail the same day that we were getting ready to go to court to battle an awful person who wanted to take our puppy away (for reasons having nothing to do with anything other than wanting to show that she could). In the end, the judge threw her case out on its butt, right prevailed, the Good Guys won one, and Gingeroo is safe where she belongs — annoying Moby and trying to dig her way to the Earth’s core through her sand box.

On the day that review arrived, we were exhausted. We were stressed beyond description (it really was months of hell that ate up most of the year). Then the letter carrier delivered a magical envelope that reminded us that yes, we had a life outside of that situation. With renewed excitement about getting through that mess and back to writing, we took care of business, then got back to work.

There was both useful criticism and thoughtful praise in that review, and we considered all of it.  But at that moment, I really needed to be reminded that I’m a writer. It had felt as though I’d left all of that to become a professional, full-time defendant, working night and day to protect our puppy, unable to think about anything else.  Within hours of getting that review, I was focusing again on the next book.

Here are some of the things the reviewer said:

“I was drawn into her (the protagonist’s) mind and world very eloquently… it was a fun read… I totally appreciated the dry humor, sense of self-determination and self-deprecation… great tension and good humor… there is definitely internal tension and it is well-crafted… I was hooked.”

Whoever you are, thank you! Hearing that you could relate to the heroine’s experiences and it made you laugh helped me to think about something other than that @#$#! lawsuit and get back to writing. And maybe even helped me get into a mental space that helped me to take care of business in the courtroom, so thank you from Ginger as well.

The Joy (?) of Rewriting

“If it sounds like writing, I rewrite it.”
—Elmore Leonard

This is the last rewrite. The. Last. Unless… someone is paying us to do it, of course. We’re at the point with R(A)TS where we’re sending it to agents. First, the pitch letter and the first three chapters… now, we’re at the point of “Agent has seen the first three chapters and wants to see the rest.” Prompting us to say “Are you sure? Read it again! Yes, that’s what it says,” then “Yay!,” then, “Okay, let’s look it over one more time… wait, there’s a typo…” It has to stop . It’s as good as we can make it at this moment. People like it. It needs to go out.

The anal-retentive “one more proof” was interrupted, and in the worst way. We lost two friends on the same day. In two different parts of the country. It knocked us over. Still doesn’t seem quite real.

We got back to work. What else can one do?  One of our friends, Johnny Wicked, aka John Wicks, is quoted in the book. Spreading the music I love, from people I’m really fond of, is one way of introducing you to them. We did have to trim some of the quotes, though. Which was painful. But we’ve kept those that really advanced the story.

I’ve edited the work of other writers, and that is far easier. You have some perspective and a bit of objectivity. It’s so much easier to identify someone else’s mistakes, because your own are too close for your eyes to focus. We’ve trimmed thousands of words, cut jokes we both loved that didn’t serve the story. Bring out the machete! But it makes the book better. It’s a quick read. The pacing improved.

But now we’re within a breath of done. It’s time. At some point, you have to do that leap off a cliff, that artistic trust fall. You’ve done the best you can and it’s time to let it find its wings.

We’ve got three more books already in the works. Time to finish them.

Well, not really. We did well on Kindle Scout and appeared on the “reader recommended” list several times, but then Kindle pulled the plug on the program.  It was still a good experience. Lots of people got to read the first 10 pages or so, and liked the book enough to recommend it for publication.  To hear from people who read our writing and wanted to see our books published was great. We were, and are, thrilled!

Writing is usually a solitary thing, like writing a message, putting it into a bottle, and throwing it into the sea. It might be a long time before you hear from anyone, if you hear at all.  You hope you’re getting your idea across… but it’s a long-distance, long-time conversation where you go on to other things, then hear from someone who just heard what you had to say.