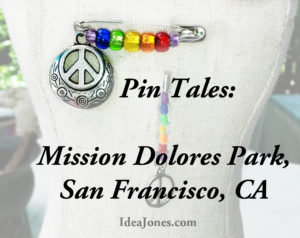 Of skaters and little kids.

This is the stop that almost didn’t  happen.

I was tired and dejected after our stop in the Haight Ashbury district. It wasn’t that people had rejected the Safe Harbor Pin — most of them had no idea they were being offered anything. They rejected me, personally. Sure, every person gets rejected, but being quickly sized up and dismissed by a hundred people in fifteen minutes is hard to take.

It didn’t dawn on me at the time that among people who actually gave me 30 seconds, the acceptance rate was about 85%. And those people were enthusiastic. No, in the moments after our visit to “the Haight,” I was just tired, feeling stung, and ready to go to our room. Mark reminded me that the Haight was an unusual circumstance and I should try again. We went to Mission Dolores Park, a beautiful city park that runs down a steep hill. At the top corners are concrete platforms from which you can get a spectacular view of the park and the city of San Francisco, joined by concrete walkways that meander through the center of the park to another area at the bottom of the hill with a playground and picnic area. The park was full of people in ones, twos, and groups, enjoying the sunshine and cool breeze.

Mark was right. I believed in this project and determined not to give up. I got my crutches (I’m on crutches for a walk of any real length), grabbed the bag (the wind made offering them on a tray impractical), and set off at the top of the park.

Right away, I ran into a group of tourists and their guide, on bicycles. I waited until the guide had finished his presentation and approached the group. “Would you like a free Love Bead Safe Harbor Pin? Surprised, they asked how much the pins were. I repeated that they’re free. They asked questions about Safe Harbor and the pins, selected their pins, thanked me, and pedaled away. I set off down the walkway, offering pins.

Understand, that for an introvert, this isn’t easy. Heck, making eye contact with a lot of people isn’t easy. Talking to them? Much harder. I like people, but where extroverts are energized by being around other people, introverts expend energy to be around people and recharge their batteries by being alone. So talking to lots of people can be fun, but it’s also tiring. Plus, I’m shy. So approaching hundreds of strangers isn’t the easiest thing for me to do. To stand on a corner trying to talk to strangers is hard for most people. To be curtly dismissed or passed by people pretending not to see you is exhausting.

But I’m also stubborn. Having decided this was important and I was determined to see it through, I smiled into every face I met. Some people averted their eyes, others smiled back but sped up their pace. If the person made eye contact, I offered him or her a pin. A few — very few — said “no, thanks” without breaking stride before I even finished the first sentence. That’s fine. They have the right we all have to decide who we associate with, even briefly. I don’t take that personally, although it’s tiring.

Most of the people I tried to engage with made eye contact. Almost all seemed wary at first, which I understand. By the end of the brief explanation, however, all but one reacted positively. They looked at the pins, asked questions (“Who made these?” “What organization are you working with?” “Why did you decide to do this?”). They listened to the outline of the meaning of various color patterns, and chose. I only had two people choose based on color alone, and no one who took one before listening to the explanation (in other words, just because it’s free).

A couple of people offered me money, even though they understood by that point that the pins were offered free. “I want to make a donation!”  “I want to help!”  I thanked them and urged them to donate that money to a charity or cause they supported. Both liked the idea — I hope they followed up on it.

I spoke with people as young as six (with parental permission) and as old as their late 60s (I don’t ask for personal information, but some people volunteer it). They were, based on clothing, accessories and volunteered information, from a wide range of cultures and economic and educational levels. Here’s a key point — in both cases, my own and the person I’m speaking with, we are probably talking to someone we would not have spoken to otherwise. We didn’t know each other. Often, we had nothing obvious in common. Everything that happened took place because we opened our walls just a chink for a couple of minutes. Here are some of the stories:

The Skaters:  I approached a group of about fifteen people who appeared to be between 17 and 23 years old, a mix of races and clothing styles, some with skateboards, some smoking pot openly (thank goodness for allergy medication — I’m very allergic to marijuana). When I first approached, they seemed a bit wary, but by the end of the first sentence, one asked, “What’s a Safe Harbor Pin?” I explained Safe Harbor and the idea of “radical respect,” that we can respect someone’s humanity even if we disagree with him or don’t approve of him, and the meaning of the pin. A young man near me said, “Fuck, yeah! I want one of those!” Several of the people in the group looked sharply in my direction, probably with an expectation that the old lady wasn’t going to appreciate that “F bomb.” I laughed, and they laughed. He accepted the bag of pins, chose one, and at my request, passed it around. We chatted about respect, who we get it from and give it to.

Another young man skated up to the group. He noticed the packet in the first young man’s hands and asked about it. Before I could say anything, the first man said, “It’s a Safe Harbor Pin.” He went on to explain the ideas of Safe Harbor and Radical Respect, and read the explanation on the back of his pin package to the newcomer. One of the girls said, “So are you for respect, or what?!?” The second man said, “Bitch, yeah! I’m all over that!” Then he glanced at me. I looked solemnly at the first man and said, “True, he’s calling you a bitch, but with great respect.” We had a chuckle and continued passing the bag around.

As I said goodbye, I asked if everyone had a pin who wanted one. A young woman in the back (so uphill from me) said quietly that she hadn’t gotten a pin, so I went up the hill. We chatted about the project as she selected her pin set. She wished me good luck with the project and I went on to the next group.

At another place in the park, near the playground, I approached a young woman with two children, a boy and a girl, about six and eight. I offered her a set of pins, and the kids swarmed up to look in the bag, all bright eyes, energy and curiosity. Mom translated my explanations and she and the kids picked out pin sets. Mom cautioned them that the pins are sharp,  but if they could take it seriously, they could have pins. We chatted for a moment, and as I wished them a good weekend and turned to leave, the little boy jumped up and shouted, “You have a good weekend! And a good summer break!”

A man and woman sitting at a picnic bench with a young girl heard my “spiel,” and accepted pins. As they looked through the bag, the man picked up a rainbow set. Before I could explain the LGBTQI significance, he laughed and said, “You have the flag (the rainbow flag, seen around San Francisco)!” He then selected a different set, saying, “It’s obvious that I’m gay. I don’t need to fly the flag on my shirt.”

Which is a good point. To me, being, say, homosexual is one facet of a personality, but by no means the only, or even most important, thing. It’s information, like height or eye color, but we are all so much more than any one thing.

A group of nicely-dressed teen girls listened to me, smiled broadly, and selected pins. Like everyone else I encountered at that site, they seemed to select pins based on the meaning more than the color. One looked up from the pins and said, “This is a good idea.”

I think people respond to this on an almost subconscious level (more about that in another post). One woman at another site said she was happy to have a name to give the ideas (safe harbor and radical respect), because that makes it easier to talk about it. When we give something a name, it’s easier to bring it up and talk about it than if you have to form the concept as you’re talking.

By the time my husband picked me up at the bottom of the hill, I was sore but happy. I met young mothers, kids, older people, young adults… and most of them were interested in the idea of Safe Harbor and standing up, in a quiet way, for the idea of respect. Those people turned my day around, and I was ready to have some lunch and prepare for the next day.