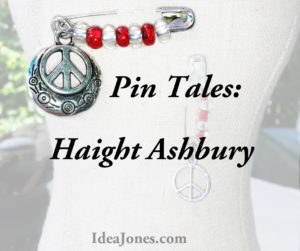 The one that almost killed the rest.

This was the site that almost killed the project, but I learned something important — don’t let the negative blind you to the positive.

I thought that if any place on Earth would be receptive to this project, it would be the Haight Ashbury district of San Francisco. It’s famous for its role in the Summer of Love and hippie culture. Admittedly, 50 years have passed since the Summer of Love, and much of the imagery of that time and the hippie movement have become marketing tools. Still, I thought that the residents, and tourists who flock to see the famous places, would be open to receiving a Safe Harbor Pin.

Within minutes it was clear how wrong I was. Mark said it best (which often happens): “This has the feel of a busy city street in New York.” People were in a hurry, many with ear buds in their ears, walking quickly, not making eye contact. Presented with a smiling stranger holding something out, they averted their gazes and quickened their paces. Some muttered, “I don’t have any change” as they passed, and I realized they had very quickly sized me up, determined I was a panhandler, and couldn’t get away from me quickly enough. Most of them never even had a chance to accept a pin or reject it — they rejected me on first sight and that was that.

It’s the first time I’ve gotten that reaction. Not that everyone wants a pin, which is fine, that’s their choice. And sometimes a person is too busy to stop, or having a bad day. But this is the first time a large number of people have quickly assigned me an identity and rejected me. It was quite an experience and I have a new appreciation for street hawkers and panhandlers and how hard a job it is.

I’m an introvert, and shy, so it’s hard for me to approach strangers anyway. Buffeted by a wave of rejection in a short time, I was ready to curl up in an introvert ball like an armadillo. Even so, I made myself continue to approach people, and a few gave me a hearing. Of those, two agreed with the premise but didn’t want a pin (one said she never wears jewelry and another didn’t explain, which is fine). Those I thanked and said goodbye to.

Others accepted a pin, including:

A group of women, maybe 18-30, accompanied by two young  girls and a baby in a stroller. They listened politely to my brief explanation, showed enthusiasm for the idea, asked questions about the pins, and thoughtfully chose the ones they wanted, urging the girls to get pins as well. The two girls asked me to repeat what the color patterns mean, and chose pins based on that, as did the adults. One adult asked for a second set for another family member as she planned to give her own second pin to her mother. They smiled broadly at the explanation of the meaning of the pins, and at the information that each card had two pins so they could give pins to other people. They thanked me and we wished each other a good day.

A young woman with dreadlocks listened to my explanation, smiled and said, “That is such a good idea. We need to make other people feel wanted. May I hug you?” I agreed. We hugged, she selected a pin, wished me a good day and left.

A woman about 40, jogging past with headphones heard me tell someone that I wasn’t going to bother her. She stopped, pulled out one ear bud, said, “It’s okay, I’m on hold, what’s up?” I quickly explained and offered her a pin. She laughed, said, “I love this!,” selected a pin, thanked me, and strode off.

A young couple debated whether it was “fair” to take a set of pins each to share with others, asking if they should just share a set with each other. One mentioned the person he would give his second pin to. I told them it was fine to take a set each to share, which they did.

We left the Haight Ashbury area earlier than planned because we couldn’t even gauge the rate of acceptance — most people never even had a chance to say yes or no. I was feeling dejected — it’s hard to stand on a corner being sized up and dismissed by herds of people before you say a word. We moved on to Mission Dolores Park, which was a very different experience.