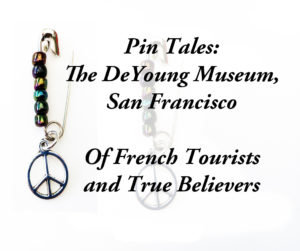 Putting out the word around the world.

This was one of those that was both not as good as I expected, and much, much better.

Because The De Young Museum is running a “summer of love” – themed exhibition, I thought this would be a great place to offer Love Bead Safe Harbor Pins. People would be there to see an art exhibit with a similar theme. The packaging had a peace sign on it, after all, and we brought the project to San Francisco in connection with the 50th anniversary of the Summer of Love, so it sounded like a perfect match.

I even contacted the De Young, or tried to. I sent a couple of emails that were never even acknowledged. Having gotten permission from the police department, the arts commission and the parks commission, I was on solid ground to give pins away in Golden Gate Park. I couldn’t advertise it (or the appearances in Mission Dolores Park), but I could do it.

Grabbing my crutches and bag of pins, I took my place on the sidewalk. Attendance was very light, so often I simply stood, looking around . Among the people who did pass by, many did exactly that — pass by. If someone doesn’t make eye contact, I let him walk by. He’s self-selecting to not be included by not agreeing to that initial contact. If someone pretends he doesn’t see me, I let him. Also, if someone does make eye contact but won’t listen, I let him pass. It doesn’t seem to fit the idea of promoting respect by not respecting that person’s right to refuse contact.

A few  people were so uncomfortable with my attempt to make minimal contact that they cringed. So I stared into my pin bag, shuffling the contents (this reduces their tension, as though the eye contact was accidental so it’s okay to ignore it). A number of people I encountered at the De Young fit this category. If you were watching me, you would have seen me staring into a bag about a fifth of the time I was there.

Of the people who did tacitly agree to make contact, most of those took pins. A couple listened politely to my explanation then refused to take a pin, but of those, one told me she agrees with the whole idea but doesn’t wear any jewelry. Another said she agrees with everything I said but didn’t want a pin. I thanked them each for their time.

A group of people gathered near me. I overheard them speaking in French and debated approaching them as I had one year of French in junior high, from a teacher who wasn’t much interested in teaching French. I can say “hello” and ask where to find “the room of the bath,” but that’s about it. My French, such as it is, is a collection of disconnected phrases, “la salle de bain,” “encroyable,” “oui et non,” “la plume de ma tante est sur le bureau de mon oncle,” that sort of thing. Only one other sentence sticks in my mind, “Je suis enerve,” which I think means (approximately), “I am tired.” Also, I have a few of the lyrics of the song “La Vie En Rose” stuck in my head.

So my command of French is more of a weak suggestion. Then it occurred to me that the guide had to be bilingual to navigate the city. When he seemed to be done, I approached and asked if I could offer his group Love Bead Safe Harbor Pins.

This began a back-and-forth between me, the guide, and the group. I explained the project and offered the pins, stressing that they are free. “Free?” Yes, I explained, free, gratis, no charge…

He explained to the group. I was just able to follow enough of what he said to know his interpretation was quite close to mine. The members of the group murmured amongst themselves. One person said, “C’est merveilleux!” I laughed, and had to explain that I was laughing as this is one of the few French phrases I understand completely (“It’s marvelous!”).

Someone asked, “What group do you represent?” I explained that I’m an independent artist. We continued to converse through the guide. Someone wanted to know how I came to do this project. Another person asked what my inspiration was. Was this my usual artistic style and medium? Could we discuss the meanings of the various colors and patterns?

After we finished and everyone who wanted pins had selected a set, a lovely woman approached and hesitantly pantomimed a wish to hug me, which I agreed to. Solemnly, she kissed me on one cheek, then the other, her hands on my shoulders. She said something to a member of the group, who translated, “She says this is very important.” Another asked to have her picture taken with me and I consented. As I wished them a good day and turned to go, a woman said something to her companion, who laughed a bit awkwardly. I looked a question at them and her companion said, “She said… it’s not polite… she said she never expected to see an American doing something like this.”

I had to laugh — so they did.  We wished each other well and I moved on to talk to a couple nearby.

Later, I saw two of the members of the group and felt bad — I didn’t recognize them away from the group! It’s hard when you meet a lot of people in a short time. They looked familiar but I couldn’t be sure, so I offered them pins… and found out they already had them. I tried to explain, but I’m not sure they understood.

I spoke with an interesting woman who was a young girl in San Francisco during the Summer of Love. We talked about the atmosphere then, and the project, and her experiences at the time. I also gave pins to (among others) a couple celebrating their 50th wedding anniversary (they married in San Francisco during the Summer of Love), a young couple from Korea who were, I think, on a date, some parents with small children who talked about trying to raise kids who are kind people while giving them the kind of wariness of strangers they need to survive (not easy, I’m sure, and partially why I don’t approach anyone who seems to be younger than 15 who doesn’t seem to be with an adult)…

One person I approached was a woman seated on a bench who had been watching me for some time. As I approached, she said, “I’ve heard it. I’ll take a pin, but I don’t think talking is going to do anything.” We chatted a bit about the idea that talking is central to doing anything much… we need the cooperation of other people. At last, she admitted she was feeling particularly downhearted that day, which I understand. Current events can seem overwhelming, no matter what your beliefs may be, and a part of what seems so disheartening is a perception that people can’t talk to each other any more, especially if they disagree.

Here’s the thing — we all disagree about something with every person we know. It may be a small thing. Should the toilet paper hang over the roll, or under?” It might be a big thing. But we disagree with every person about something. Sometimes I disagree with myself — I’m not sure what the answer is. So if I don’t talk to people I don’t agree with, I won’t even be able to talk to myself!

My husband met a different tour group and they accepted pins, as did the driver. A couple from England took a set for themselves and a set for their granddaughters. Another couple asked for a set each so they could give the second pins to their daughters.

One couple enthusiastically selected pins, and the man held out some five dollar bills. “It’s free,” I repeated.

“I really appreciate that,” I said, “but I don’t ask for or accept donations when I’m giving away pins. Take that money and donate it to a charity or cause you believe in.”

The woman with him said, “We could give it to the museum! We’re just about to go in!”

“That would be a great choice,” I told them. “Thank you!”

They went off toward the museum, money at the ready. I hope they followed through on it. I get that reaction a few times a day when distributing pins, and I tell everyone the same thing.

Which reminds me — I’ll be creating some very special pins soon, and those will be offered for sale, with part of the money going to charities helping people in need (like Opening Doors and Mustard Seed School). I’ll post when those are available.

And if we meet, ask for a set of pins. I’ll always try to keep a few on me.