A Field Guide To The Love Bead Safe Harbor Pin

If you’re new to the Love Bead Safe Harbor Pin and you see one “in the wild,” on someone on the street, in a restaurant, at school, at work, or any of the places you might find cool people, you might wonder if there’s any significance to the color, or the charm hanging from the pin. The answer? Sometimes yes, sometimes no.

The safety pin is what makes it a “safe harbor” pin. So no matter the color or decoration, it’s still a Safe Harbor Pin. The rest is about standing up for a special cause that is close to your heart. It doesn’t mean you don’t care about anything else, just that this particular cause is one you’re especially passionate about, or is especially relevant to your life, or in the lives of people you know. 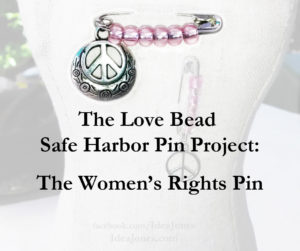 I’ve really never understood why some people think being a feminist is a bad thing. I keep hearing women say, “Oh, I’m not a feminist!,” as though to assure other people they aren’t dangerous, or contagious. One day, I engaged a young woman in conversation, just asking what it was about feminism she didn’t like. This was only a couple of years ago, mind you. She said something like, “Well, I like men!”

I nodded. “So do I, the nice ones, anyway.” I asked her if she thought people should be paid for doing the same work, about as well. “Sure!” But, I protested, men have to support families. Women don’t. “What?,” she protested. “There are a lot of women who have kids and aren’t married, you know.”  Yes, I admitted, I suppose that’s true. But what about child care? Women should be home taking care of their kids, right? “Most women can’t,” she said. “They have to work.”  And some might want to work, I added. “Right.” But it doesn’t matter much what child care you use or how expensive it is. She looked at me like I was nuts. I had to laugh. “You’re a feminist,” I told her.

She really didn’t know. You might think everyone knows this stuff by now, but a lot of people don’t. They don’t know that at its base, feminism is about women being treated not like men, but on an equal basis with men. That how you are treated and what your options are shouldn’t be determined by your gender, whether you are male or female, in your personal or your professional life. The only two jobs I can think of that are gender-specific are sperm donor and surrogate mother.

There are, however, problems that are either unique to one gender or the other, or far more common for one gender or the other. You are far, far more likely to be raped if you’re female, for example. Breast cancer can hit either sex but is more common in women. Ovarian cancer? Women, obviously. So while feminism is really for any reasonable person, there are a few “women’s issues.” Women still lag behind men in pay for the same jobs, and you can debate how much the disparity is, but that’s not the important issue. It’s that women are paid less, not how much less.

Health care? An issue for everyone, but there are certain things that strike women more. Lack of access to contraceptives. Prenatal care. Lack of access to screenings like pap smears and mammograms that can catch disease when it’s early and treatable.  By the way… Planned Parenthood? Its most common services, by far, are health checks for women who either can’t afford or don’t have access to other sources of health care. So defunding  Planned Parenthood sentences a lot of women with low incomes to illness and death.

Rape? Do I even need to spell this one out, with the slap-on-the-wrist trial of a college athlete who dragged an unconscious woman behind a dumpster and raped her fresh in our minds? Yep, “She was asking for it because she (went there at all/wore what she was wearing/danced/you name it)” is still alive and well. Women are being held accountable for men’s choices. If I said, “I bashed him on the head, but it’s his fault because he walked past me dressed (fill in the blank) and he had a head,” I’d be sent to jail so fast my own head would spin. But rape kits expire untested and judges give offensively mild sentences and the justification is always that the victim was responsible for the choices of her attacker.

Child care? Women still get tasked with the bulk of the responsibility for child care, but this is an issue everybody can rally around . For most women, not working isn’t an option. The family needs their income. So access to affordable, quality child care is an issue that hits women, men, children, employers, everyone. Remember, we will live in the world those kids run. We need them sane, healthy, educated and safe. Employers need those women on the job, not taking off work because they can’t find child care. Any man worth the name wants his kids safe and healthy. Even if you don’t have kids, you can get behind this one.

Childhood education and nutrition? Another “everybody in/everybody wins” issue. We will grow old in the world that these kids will grow up to run. And once they reach young adulthood, our economy will count on them being employable, and employed. Which means we all need those kids educated, healthy and ready to work. Think you don’t need to worry about this because you have no kids, or you have money so your kids are okay? What planet will you be living on where you don’t need other people to do things? When I’m older, I want to be surrounded by people who are educated, healthy, employed and don’t have any reason to clobber me and steal my purse.

There’s probably at least one issue on that list that you can get behind, which would make you… take a deep breath… a feminist.

That’s why we have a “Women’s Rights” pin. So women and men who really do like women (not just want them) can say that they believe a woman’s life is as valuable as a man’s, and women shouldn’t suffer or be penalized for being female. Sounds pretty “Well, duh, of course!,” but it’s still a problem.