How To Save Your Own Life 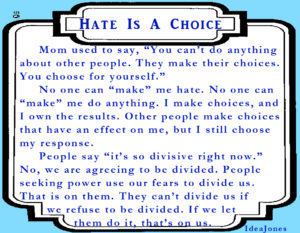 (Or Break Your Own Heart).

It’s been a scary year. No matter which side of the fence you were on, or if you chose to stay home, or when offered a choice between A and B you decided to order a mongoose, someone has called you a deluded moron, either online or to your face.

We’ve been played, dear ones. And we’re still being played.

We were encouraged to be angry and suspicious of each other. To believe that *our* side held the golden ticket to the 100% pure, diamond-studded Answer From On High, and the people on the other side were idiots, deranged, dangerous, barely human. If you found yourself saying (insert group of your choice) are (stupid, crazy, dangerous, unpatriotic, selfish, lazy, whatever insult you’ve got), say it with me now, “Baaaaaaaa!” We’re growing wool, dear ones.

Doesn’t matter what party you belong to or if you don’t belong to a party at all. If you criticized not the candidates, but their followers, you got played. Because those people you’ve been calling names? They’re the same people you’re going to have to work with if anything is going to get better. No group is big enough to do it alone. And no group is large enough to do it despite the others. Martin Luther King Jr. said, “We may have come to this country on different ships, but we’re all in the same boat now.” He wasn’t wrong.

The riots going on? No matter what party we belong to, we own those. If you’re a Republican, and you spent this last year saying “they” don’t love this country, or “they” want to take away jobs and don’t care about what’s important or are just blindly following the party line, you personally asked your neighbors to refuse to accept it if the GOP candidate won and fight to protect themselves. If you didn’t stand up and loudly refuse to go along when candidates and supporters called other people a threat, then you bought a piece of the discord going on now.

Democrat? Spent the year ridiculing supporters on the other side, saying they’re dangerous, stupid, crazy or all three and want to throw the country back to the Stone Age? Congrats, you helped solidify the opposition’s support and gave those people no good way to simply change their minds.

Third party voter or nonvoter? By not bothering to find out how the Electoral College works, you turned yourself into a cipher. You removed yourself from the process and made it that much easier for the powers that be to ignore you.

If you got this far, first off, thanks, you’re a brave soul. And yes, I count myself in the “us” that screwed everything up. We all belong to this club.

So what’s next, dear ones? Where do we go from here? What do we want done? Let’s be clear — no matter who won, that person would still be an insider gaming the system. Not that whoever it is would wish you ill, but chances are his first priority would be pleasing the people who got him there. He’s willing to do you some good if it does him no harm.

So let’s not leave it up to whoever’s in charge. Leaders can only lead if followers follow — otherwise that “leader” is just a person going it alone. Talk to your neighbors, yes, even the ones you disagree with. What do you want in your community?  What can you agree on? Find that stuff, take all this wild energy we seem to possess, and let’s get to work. Together.

One thing to remember is that when you’re hurting or unhappy and someone tells you the problem is *that* person *over there,* it’s usually to deflect you from noticing that at least part of the problem is right there, pointing at someone else. People who genuinely want to help you don’t waste time getting you to blame somebody else. They help you.