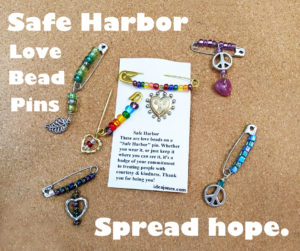 We can all be “Safe Harbors” for the people around us!

I never pictured myself becoming an activist, and certainly never thought of myself and the word “hippie” in the same sentence. When I was in kindergarten, protesters were the people on the news who shouted at everyone, and hippies were the people hanging out in ragged clothes who looked like they  needed a shower.  Suffice it to say that it looked as though the 60s had missed me — I was too busy trying to learn to tie my shoes. Looking back, there were things I did that were very 60s, raising mealworms to feed birds caught in an oil spill, for example. That was the start of a lifetime of volunteering, still I didn’t think of myself as a real child of the 60s.

Then I started hearing from people who were being threatened and harassed. Who were afraid, for themselves, their families, their friends, and I got mad. Normally I’m a cheerful sort, and it takes a lot to get me angry, but more and more, people I knew were being ridiculed and threatened. They felt isolated. Unsafe. Unwanted.

It was about that time that I heard of the Safe Harbor pin, an idea that came to the U.S. from the U.K. Wearing a safety pin was a way of signalling that you were a “safe harbor,” a person who would try to treat someone with respect. I liked the idea and started wearing one. Then word came that white supremacists were co-opting the symbol, wearing plain safety pins. That was offensive, but to whom could I object? Where was the place I could register my complaint?

So I took my pin and “tarted it up, ” decorating it, making it more flashy and flamboyant. “Good luck wearing something like this, asshole!,” I muttered as I added beads and charms.  I posted a photo of that first pin, and heard from people who said they were now going to “tart up” their pins as well. I made more pins, fastened them to old business cards (perfect size), and started carrying a few with me. Whenever someone  liked my pin, I gave him one.  This created some really interesting and enjoyable interactions.

Now, I put two on a card, and ask the recipient to give away one, spreading the hope. I don’t ask where that person comes from, what he believes, what his personal life is like. If he wants to talk and I have time, I’m willing to, but the idea is that I don’t have to approve of someone to offer him encouragement, and he doesn’t have to approve of me to accept it. It’s a simple thing, between two human souls.

I have given away almost 100 pins since December of last year. Now, we’re spreading the hope even further. There’s a class scheduled for June in San Francisco on making Safe Harbor pins, and in connection with the 50th anniversary of the Summer of Love, I’ll be handing out pins in five spots in San Francisco. My goal is to hand out 500 pins.

But making 500 of anything takes time and money. My husband and I have been funding this ourselves so far, but to get to 500, I’ll be running a GoFundMe campaign (more details to come). Donors will receive a set of pins and sponsor a set to be given away. I’d like to give some away to centers helping at-risk youth as well.

While doing this, I’ll be putting my sculpting and other artwork on hold. Like I said, making 500 of anything takes time. Mom used to say that time was the gift so precious, people rarely give it to one another. So that’s part of what I give with the pins, a bit of my time, a piece of my creativity, a morsel of hope — and then hope that person spreads it, too.

More on the GoFundMe to come.