Birth of a (Painted) Owl

Process is interesting to me — how someone makes a thing. I’m a sucker for factory tours (Jelly Belly in Fairfield, CA and the Budweiser plant nearby have fun tours), or watching someone create.

The latest animal painting, “The Night Watch,” is the first in a planned trio of paintings featuring owls. I’d painted an owl before, in a hurry, for a charity fundraiser, and on a 9-foot market umbrella at that (first time for that, too): 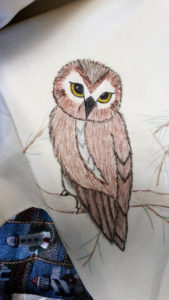 Detail from the beginning of a 9-foot painting of owls and their prey.

This is an early sketch for the finished painting, which featured owls and their prey catching sight of each other. At the time, I hadn’t planned to paint another owl, but then an idea started rolling around in my brain, an owl dancing. 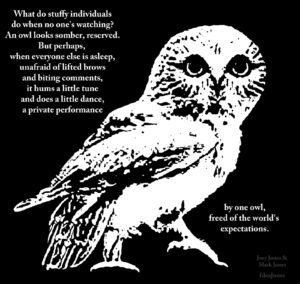 A painting and poem from our Redbubble.com shop.

When i finished the painting, the poem came into my head while I was looking at it. I think most of us feel we have a secret self, and that self has the potential to do things very different from the things others expect.

So that led to an image of that same owl, about to take flight. 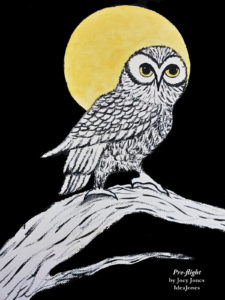 The moment just before takeoff. Ready to fly, but not yet in the air.

In the end, I liked the idea enough to create the full painting in color, that moment just before vaulting into the sky, one last look back before launching. 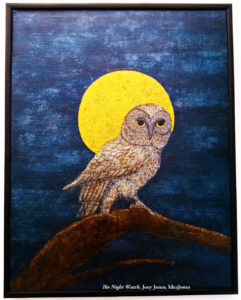 The first in a trio of planned paintings featuring owls, here an owl pauses before taking flight.

Each owl informed the next. Now The Night Watch is set to be in a show, and over the summer I’ll complete the series. It’ll be interesting to see where my owls are by the time I complete the last one.