A Dream Of Forgiveness 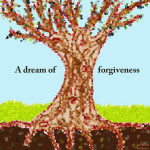 What is forgiveness? When and how does one forgive? Are there unforgivable actions?

I had a dream, sort of a nightmare but also seductive. Someone who had hurt me, in myriad ways, about as badly as you can hurt someone, and I had him down on the ground and I was beating him.

Horrifying in that I’m not usually an angry or violent person, and I wasn’t just hitting him. I was pounding him, obliterating him. This was all very graphic. In the heightened awareness that belongs to dreams and a few, rare waking moments, I could feel beyond feeling, hear every gasp, grunt, rasp of fabric on concrete, the different sounds my fists made depending on where they landed. I could smell everything (better left not detailed), even taste it.

This person is gone and has been for some time, and I’d gone through a lot of work to forgive him. A recent revelation brought all that old stuff I’d thought not just buried but dealt with, processed and done back to life.

You see, I’d hung my forgiveness on one thought, that as sick and awful as he could be, nothing he’d done to me was conscious. Not deliberate, by choice. He was out of control, I told myself. Sick. He’d hurt me, but he hadn’t meant to hurt me. That would have made it all so much worse, if he’d chosen to instead of just blindly thrashing around. If I’d been a chosen target, not just a victim of a sort of terrible accident.

That one idea was what I hung all the forgiveness on. It made it possible for me to forgive him.

Years pass, he’s gone, and someone asked me a question. I answered it and in that moment all the foundations of that forgiveness crumbled. The answer to that question made it clear, beyond argument or interpretation, that at least some of what he’d done had been done by intent. Victim chosen, actions planned. Target identified, aimed at and hit.

The foundation I’d based forgiveness on had been jackhammered, suddenly removed, sending the forgiveness toppling. Talking to him, were that possible, would have been as fruitless as it always was, after all, while he hadn’t denied what he’d done, he also never expressed any regret or guilt for it. Just anger that I’d finally told anyone. What he’d done wasn’t the problem — my talking about it was, to his mind, the problem. Not what he’d done but that anyone knew.

And talking to him wasn’t an option. He’s gone, after all.

I sat up in bed, shaking, angry, frustrated, frightened of the force of my own reaction. And resentful. I’d been through this before, after all. Faced the demons, forgave him, moved on. And here I was with it all to do again.

A friend asked if it was necessary for me to forgive him again. Couldn’t I just move on? Forgiveness, she rightly pointed out, doesn’t come when you call. It’s a process and can’t be rushed. One can’t magically forgive just for wanting to.

She had a good point. The problem is, my mind tends to circle something like this until I find a way to forgive. Until then, it just won’t let it be. My mother used to say once she got something in mind she was like a dog with a bone, and I’m my mother’s daughter. Until I found some bit of forgiveness for this person, my mind would keep turning it over, rolling it around, looking for an answer.

I did try putting it aside. Over and over. And found myself sleepless and shaking, alarmed at how delicious I’d found pulverizing another human being, even in a dream. How satisfying I had found his screams as they became cries, then whimpers. How much I hated feeling the seductiveness of rage.

He was a tortured, complicated, injured, sick human being. Good at faking it in public, and even in his own mind. He edited life as he lived it. You could go through an experience side by side with him and not recognize it an hour later when listening to him tell someone else about it. He would tell me things weren’t happening as they happened or that something else was happening than what was clearly going on, and believed his own lies. And the events that had been at the back of all this were ones I’d always remembered clearly (not the sort of thing one forgets, after all). It was just that I hadn’t wanted to look at them closely. It was all bad enough on the surface, but taking a closer look, it became clear that those times, and others, had been calculated and planned. I’d just avoided admitting that, because if I admitted that he deliberately hurt me, how could I love him, and I did?

I hung all my forgiveness on believing he never meant to hurt me, he hung his existence on false memories he created for himself about who he was and what had happened.

I got past loving him, for the most part. It wasn’t possible to forgive him at all while I still loved him and hoped that he would realize what he’d done, repent, and love me back. It was so hard to let go of that hope that I hung on to it, and him, for years, loving him and yet never forgiving, holding it for the day all was made right. In time, I realized all would not be made right. Our relationship would never be what it should be because he didn’t have it to give. I walked away, and my only regret was that I didn’t do it sooner.

And here I am, knowing I will have to forgive him. Not because he deserves it. He doesn’t. Not because he asked for it. He never did and now he can’t. So far as I know, he went to his grave whining about how he missed me and unable to understand why I told anyone what happened. Again, for him, the problem was never what he did, it was that I talked about it.

I have to forgive him one last time because I’m tired of carrying around this load he put on me. And maybe that’s my path forward.

Putting it down for no other reason than because I don’t want to carry it any more. I don’t want him to control any part of who I am or how I feel. Perhaps what I’m looking for is not the forgiveness that should follow repentance. Perhaps the flavor of forgiveness I’m seeking is that granted by someone who just isn’t interested in expending energy to maintain anger or resentment.

Forgiveness isn’t forgetness, but it is freedom. He gave me burdens. I’m going to learn to put them down and give myself release.